Top Japanese trading house signed trade agreement with AKR, paving the way for the two countries for closer cooperation on the agro trade, and turning the rice policy of the Cambodian government into action. 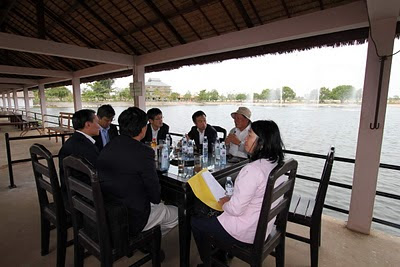 The Japanese company aims to expand its activity to ASEAN countries, especially in the rice business where the firm already hold a strong position in the agro trade in the world. Marubeni is a long estrablished company (since 1858) with last year trading volumn more than 105 US billion dollars. Her business activities range from energy, machinery, food to finance and real estate.


This agreement will strengthen the position of Marubenni in the rice trade, when it tap to the new world rice supplier, Cambodia.

AKR is a major quality/reliable rice producer. Estrablished 10 years ago nearby Phnom Penh, it plays a major role, for the private sector, to develope the countries rice industry. AKR is expanding it capacity this year upto 800 tons a day rice milling with a two megawatt rice husk fired power plant to ensure a reliable energy source. 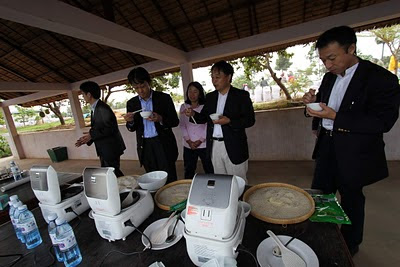 Marubeni executive pointed to the rice bowl that cooked Neang Malis rice with apprciation. The rice cooking test comparing the rice taste from the other rice varieties avaiable in the market.
Posted by AC at Thursday, December 30, 2010