Cambodia has seen a positive sign towards achieving its self-imposed target of one million-ton- rice exports by 2015 as the sector has been attracting a number of large investments from China.

In last August, the government launched the rice export policy in a bid to boost the exports of one million tons of milled rice by 2015.

"The main challenges to achieve this target are the shortages of sophisticated post-harvest technologies and capital to buy rice paddy from farmers," Kong Putheara, director of the Commerce Ministry's Planning and Statistics Department, told Xinhua in an interview on Friday.

However, the issues have gradually been broken through as a number of large Chinese firms have signed up to build a hi-tech rice processing plant and to purchase Cambodian rice for Chinese market.

Among those firms is the China Grain Reserves Corporation ( Sinograin) Guangzhou Branch.

The firm signed up on August 16 to buy up to 200,000 tons of milled rice per year from Cambodia and has put its initial investment of 20 million U.S. dollars with a local T.T.Y Corporation to buy rice paddy from farmers to process for the exports to China.

And the China's Yunnan Overseas Investment Co., Ltd. signed a Memorandum of Understanding with a local Soma Group of Cambodia to build a high-tech rice processing plant to process rice for China.

Besides China, he said the Philippines, Brunei, Senegal, Kuwait, Qatar, and Bangladesh has also approached Cambodia for rice purchase despite no deal signed yet so far.

Phou Puy, president of the Federation of Cambodian Rice Millers Associations, said Saturday that currently the country has had only a few modern post-harvest technologies and also had a few large-scale rice storage.

He added that the country's sophisticated rice processing plants are capable to process only about 200,000 tons of rice per year at the moment, so to meet the target of exporting 1 million tons a year by 2015, it needs to be invested other four or five times in modern rice processing plants.

"Therefore, Chinese investment in the rice processing plant is on the right time," said Phou Puy, who is also Chairman of the rice exporter Baitang Kampuchea Co., which invested in a modern post-harvest technology in Battambang province.

The company had exported nearly 20,000 tons of processed rice in the first half of this year, double rise compared to the same period last year.

Puy said the Baitang Kampuchea had also signed a MoU with a Chinese firm for the supply of 10,000 tons of milled rice to China per year and the exports will be starting from next year.

He said his plant is capable to process an average of 130,000 tons of rice per year.

Chan Sophal, president of Cambodia Economic Association, said on Saturday that European countries and China will definitely be the big markets for Cambodian good quality rice in the future.

Cambodian government has simplified procedures for rice exporters; however, the high cost of electricity and transport compared with its neighboring Vietnam and Thailand is still a concern for investors, he said.

Currently, Cambodia has about 35 rice exporters; the country had exported 80,442 tons of good-quality milled rice in the first half of this year, 369 percent increase from 17,144 tons at the same period last year, showed the statistics from the Ministry of Commerce.

However, this country can export only small amount of its milled rice so far due to the lack of sophisticated post- harvesting technologies, storage, and capital to buy rice paddy from farmers; therefore, most of the rice paddies have been sold to Vietnam and Thailand without recycling.

In a year, Cambodia lost about 600 million U.S. dollars from rice production that exported without recycling, Prime Minister Hun Sen said last year during the launch of rice export policy.

Chan Sophal said that the government's rice export policy would broaden and strengthen the foundation of economic growth while accelerating poverty reduction and improving the people's livelihoods through job creations when more rice post-harvest technologies have been built in Cambodia.

With a series of Chinese investment plans in the sector, it's believed that Cambodia will be able to achieve its target of exporting one million tons of milled rice by 2015.
Posted by AC at Sunday, August 28, 2011 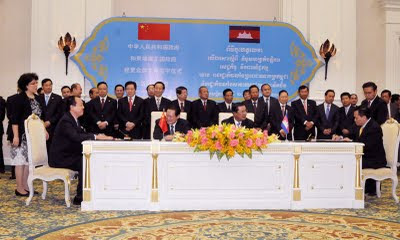 Historical event - Zhou Yongkang, a member of the Standing Committee of the Political Bureau of the Communist Party of China (CPC), Cambodian Prime Minister Hun Sen , and other senior Ministers of Cambodian government, witness the historical rice trade deal between Cambodia and China in Phnom Penh, Aug. 20, 2011. (picture by AKR)
By AC
20 August 2011

COFCO, a leading grain, oils and foodstuffs import and export group in China and the biggest rice importers and exporters, signs a rice deal to buy the first Cambodian rice from Angkor Rice to China. The first shipment is 100% Neang Malis Fragrant rice, which is the best quality rice available from Angkor Rice.

The contract between the two companies indicates that "it is the first rice business between China and Cambodia".


"COFCO has developed wide sales channels and networks all over China and possesses the top brands of rice and other grain products in domestic market. In order to promote Cambodian rice in China, COFCO will make the full use of its leading position and brand awareness, strengthen the input of marketing and sales promotions, and make their best efforts to gain the accpetance of Cambodian rice among Chinese consumers".

Angkor Rice is a reputable rice producer who produces the best quality fragrant rice. It regularly exports rice to Europe, Hong Kong and Australia. The process to select only the best fragrant rice paddy without mixing cheap rice and its own contracted farmers make the producer different from the other local rice traders in Cambodia. Angkor Rice is expanding its milling capacity and the fragrant rice growing area, with participation in Clean Development Mechanism (CDM) intend to reduce green house gases that warming the globe.

Rice is a major stable for Chinese consumers. Although China can produce a lot of rice every year (see stat from USDA), but the volume is still not enough for the domestic consumption especially for the high quality fragrant rice, which can be grown only in some area in Thailand and Cambodia. China imports quality fragrant rice from Thailand approximate 200 millions dollars per year.

The main issue to export to China is not the problem about agricultural pests which can be easily controlled. But the issue is the dishonest sellers who mix low quality rice,but look similar, to high quality fragrant rice and brand it as 100% fragrant rice, Mr. Chieu Hieng, CEO of Angkor Rice said. "They just pack it and brand it as good rice but instead it is cheap rice", he added. 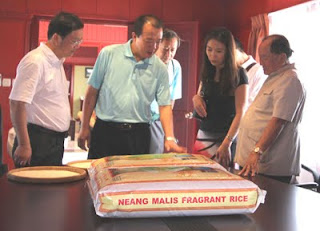 Mr. Chieu Hieng (right) shows Neang Malis fragrant rice to COFCO officers, leaded by vice president Mr. Lv Jun (2nd from left). The trade envoy Mr. Zhou Shanqing (3rd from left), Director of the Dept. of Foreign Trade MOC. PRC. also accompany the group.
Mr. Chieu said that, the buyer is very confident in Angkor Rice, and both of the parties understand very well the commitment to deliver only the top quality rice to the consumers. He also mention about the Cambodian government rice policy that, "I believe with the true intention of Somdech Hun Sen to push for the rice industry that benefit a large scale of Cambodian people will be eventually successful.". (read more about the Cambodian rice policy here)