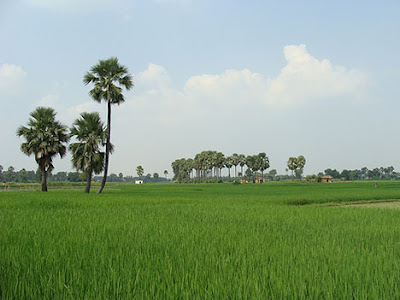 Cambodian Business Review
May 2010
Volume 6, Issue 5
From the farmer’s perspective, contract farming provides stable market access, credits, extension services, infrastructure and other benefits, but has drawbacks such as limiting the flexibility of farming and marketing.

Farmers with larger family sizes, younger and more educated household heads, less asset value, and those with farm locations closer to the highway are more likely to join the contract. The contract farming of non-certified organic rice has a positive impact on farmers’ profitability.

They also suggest that progressive farmers living nears the highway tend to join the contract first, but leave contract farming early, while farmers in more remote areas remain under contract. It appears that the sample former-contract farmers’ profitability did not decline after leaving contact farming as they further intensified their farming systems to produce fro the less chemical conscious market.

Thus, contract farming may be involved in the process of helping subsistence farmers develop into independent commercial farmers.

Under contract farming, farmers usually agree to deliver specific commodities in predetermined quantities and to meet predetermined quality standards, while contractors agree to provide production support (e.g., supply of input and provision of technologies) and accept products at predetermined prices.

Contract faming is beneficial to farmers because it opens up otherwise unavailable markets (especially to smallholder farmers), providing materials, technological and financial support, and reducing farmers’ costs and the risks involved in selling products.

It also benefits contractors by allowing them to establish close relationships with farmers and by reducing uncertainties in purchases through predetermined timing, prices, and quality standards.

While contact farming is a conceptually sound institutional arrangement, lack of flexibility is one of its main liabilities, and coordination problems are faced during its implementation.

As contract farmers are often required to grow new crops or adopt unfamiliar farming techniques, they tend to encounter greater production risks. They are also likely to face greater credit risks because of excessive advances, which tend to jeopardize the sustainability of their operations in the long run. 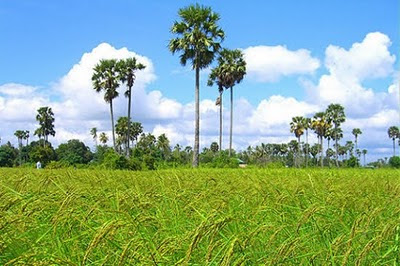 Supports from contractors can help reduce these risks. However, overdependence on a contractor not only makes farmers less adaptive and hence more vulnerable to economic shocks, but also tends to reduce their bargaining power in contract negotiations.

Contract farming may also be biased against poor farmers in remote areas while favoring better-off farmers with extensive land who are living in areas with good infrastructure. Contract enforcement is another major issue.

Its main business is to export non-certified organic Neang Malis (an aromatic Cambodian rice variety introduced by AKR) to the international market1. AKR has invested about US$8 million in a high-tech rice mill that has a processing capacity of up to 10 tons per hour or up to 30,000 tons per year.

In 2005, the company worked with farmers in four provinces (Kandal, Kampong Speu, Takeo, and Kampot) which were selected based on their ideal agronomic conditions for the cultivation of the Neang Malis organic rice.

At the start of the contract farming operation, only about 100 farmers joined the contract because of a lack of trust in AKR’s contract arrangement as well as the company’s low milling capacity. Subsequently, the total number of contracted households reached more than 40,000. More than 80% of the contract farmers are located in Kompong Speu province.

AKR’s experiences shows that contract farming was generally successful in Kampong Speu province and in some nearby areas in Takeo province. Field observations indicate that the distance from the operation sites to the AKR headquarters is not a factor determining the success of contract farming.

Rather, most of the successful cases were farmers in former forestland and land close to mountains where rice can be produced at higher quality and yield. On the other hand, farmers that are close to AKR (and therefore close to main roads) and have more market experience tend to have higher levels of defaulting on the contracts.

This latter group of farmers is made up of the former contract farmers of the survey. AKR is involved in every stage of rice production and marketing. Its roles include: 1) identifying areas suitable for growing fragrant paddy; 2) establishing farmer associations based on existing commune structures and bringing these under its management; 3) using these associations to recruit farmers; 4) delivering improved seeds and technical advice to contract farmers; 5) monitoring and solving production problems; 6) collecting and purchasing rice output at AKR’s gate; 7) sorting milled and packaged paddy into different types; and 8) exporting rice to international markets, including Europe, Australia and Hong Kong.

Since all steps of production and processing are well coordinated, AKR shortens the supply chain under contract farming and thus lowers transaction costs for rice export, relative to the normal supply chain. 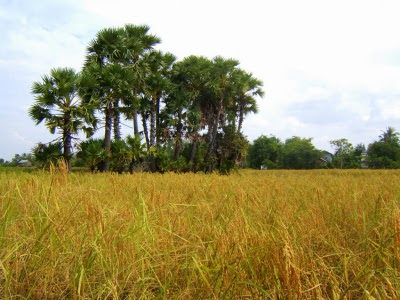 According to AKR’s contract arrangement, the company distributes Neang Malis seeds in credit during July and buys back the output from October to January of the following year. This arrangement requires farmers to repay the credit seeds and transport the harvested paddy to the company’s rice mills.

The amount of seeds that farmers need to return, the minimum guaranteed price, and the penalties for contract defaults, are explicitly stated in the contracts. However, while contract farmers agree to obey AKR’s quality control mechanisms, conditions related to production methods are not clearly specified in the contracts.

The contracts also do not clearly state AKR’s liabilities if it does not buy contracted rice at the predetermined prices. The contracts state that AKR is obligated to buy rice from farmers at the minimum price without clearly specifying the terms of purchase in detail.

In practice, AKR often uses technical reasons to reject or lower the prices of rice that farmers have transported to the firm. AKR establishes commune associations to help enforce contracts.

Each commune association consists of a head, a deputy and the village head. The head and deputy are trained by the firm to understand the basic technical aspects of organic farming and the farming of Neang Malis.

Each association routinely observes the progress of its members and reports to the AKR management. The progress report includes every stage o production from plowing, transplanting, water management, and harvesting.

Each association also provides basic technical advice to its members, advises them not to use chemical fertilizers, and helps them grow other crops after the harvesting season. The associations also help members develop mixed or integrated agriculture (e.g., growing vegetables and raising livestock) to increase incomes and reduce poverty.

Commune associations report to AKR any issues related to the production process such as drought, flood disease, insect and other significant issues that affect production. The firm channels its policies through the associations and provides extension services via its agents.

At present, these associations are tightly controlled by the firm and have little bargaining power.

However, the have a promising future and could develop into independent organizations representing the interests of the community.

AKR associations appear to be a good model for community-based development. They provide the basis and experiences for the future development associations in Cambodia where farmers are predominantly smallholders. 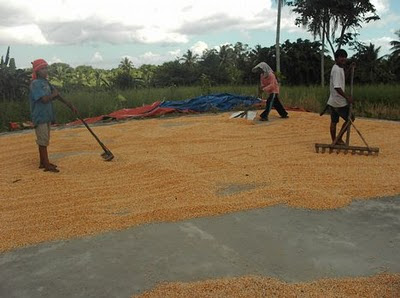 High rice price is a major factor4 attracting farmers to join the contract, which not only subjects them to strict quality standards but also constrains their freedom in farming activities such as the use of seeds and chemicals.

As contract farmers con sell their rice at higher prices, one may expect that hey would have higher revenues, which nevertheless turns out not to be the case. On average, contract farmers’ revenue (per hectare) from commercial operations is 722,000 riel, which is lower than former-contact farmers’920,000 riel but not significantly different from never-contract farmers’684,000 riel.(US$1/-=4100 CR).
Posted by Sophea at Tuesday, December 14, 2010