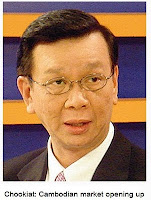 The alliance, which includes Malaysian investors, has been in talks with Cambodian businessmen for a venture that would initially set up a rice mill and processing plant for export.

Chookiat Ophaswongse, managing director of the Huay Chuan Group, said Takeo province on the Vietnamese border is being considered. Takeo is about 150 kilometres east of Sihanoukville, Cambodia's deep-water seaport, which would facilitate shipments.

Mr Chookiat said Cambodia should have four million tonnes of unmilled rice for export this year - 3.5 million tonnes to Vietnam and the rest to Thailand.

"The Cambodian government has opened the market wider to foreign investors, especially those bringing in new technology and R&D for improving the local rice industry," he said.

Cambodia reportedly shipped 900,000 tonnes of rice in 2010, almost double the 500,000 tonnes in 2008. However, the actual volume may be even higher due to inefficient data gathering.

It would develop quality jasmine and glutinous rice seeds, promote higher-quality farming and process the rice for both consumption and use as an ingredient in a vinegar factory.

Toyota Tsusho earlier met with Huay Chuan Rice to discuss a possible joint investment in rice-based products such as flour and crackers for domestic consumption and export to Japan.

But last year's political unrest in Bangkok put that project on hold. As well, Japanese investors are unsure of Thailand's rice policy. "There's a risk the new government could reinstitute the rice price pledging scheme, which could result in market and cost instability," said Mr Chookiat, who is also honorary president of the Thai Rice Exporters Association.

The association will today lead a delegation to Cambodia to promote tighter cooperation in the rice industry.

Other rice exporters including Thailand's largest, Asia Golden Rice Co, are working with Japanese partners to invest in Cambodian rice.
Posted by AK at Wednesday, March 30, 2011

(Reuters) - The Philippines must secure long-term supply deals with more rice-exporting countries even as it seeks to become self sufficient in the staple food by 2013, the state grains agency head said on Wednesday.
The country, the world's biggest rice buyer in recent years, was in talks with Thailand and Cambodia for rice supply arrangements, similar to an existing deal with Vietnam, said Angelito Banayo, administrator of the National Food Authority (NFA).

"We have to have supply agreements with the major rice exporters so that in case weather disturbances impact on our attempts to be self sufficient, we can run to them for additional supply," he told the Reuters Global Food and Agriculture Summit.

At least 20 tropical cyclones enter the Southeast Asian country of more than 94 million people every year. Last year, it bought a record 2.45 million tonnes after a drop in local production due to strong typhoons in late 2009 and a severe drought in the early part of 2010.

Banayo said he has proposed a supply agreement with Thailand, which has been endorsed by the Agriculture department.

"Thailand is assuring they can give us 1 million tonnes. We're looking at a three-year arrangement," Banayo said. "If it works out, then we can seek an extension."

He said a similar agreement with Cambodia was possible.

"We are already in talks and the Cambodians are already studying the proposed memorandum of agreement, although they still cannot commit any volume because of their limited milling capacity," he said.

Manila has an existing rice supply agreement with Vietnam covering up to 1.5 million tonnes of rice annually. The deal was extended to 2013.

"I want us to have sources of rice other than Vietnam and Thailand so that I have a wider field to choose from. Perhaps we could also enter into supply agreements with India, Cambodia or even Myanmar," he said.

The Philippines has firmed up plans to import 860,000 tonnes of rice this year, part of a downsized purchase plan involving 1.3 million tonnes for this year's needs. Of this volume, 200,000 tonnes would sourced from Vietnam.

The Philippines aims to further cut its rice imports next year to just half of this year's purchases and to become self sufficient by end 2013.

The private sector has been allowed to buy up to 660,000 tonnes this year, with a government tender for the right to import the grain set on March 23.

Banayo said the country should learn from Indonesia's experience as it seeks to wean itself from rice exports.

"Indonesia was self sufficient a few years ago. Now it is buying heavily in the market," he said. "Self sufficiency is not a permanent thing because it is always subject to vagaries of weather disturbances." 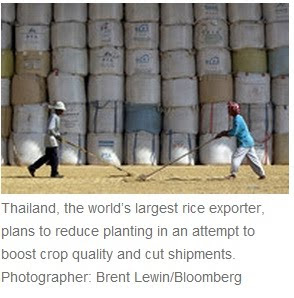 The plan started in October may eventually reduce exports by about 2 million metric tons a year, or about 20 percent of Thailand’s shipments, Pramote Vanichanont, honorary president of the Bangkok-based association, said in an interview, without giving a timeframe. The nation plans to set a global benchmark price through a centralized auction, the government said.

A drop in supplies from the country, which represents one- third of global shipments of 30 million tons, may boost prices in Chicago, which have dropped 3 percent this year, trailing wheat and corn. World food costs rose to a record in February, the United Nations estimates, contributing to riots in Libya and the toppling of leaders in Tunisia and Egypt.

“I doubt whether it is a good policy, as cutting the supply may lead to food shortages,” Kiattisak Kanlayasirivat, a director at the Thai office of Novel Commodities SA, which trades about $600 million of rice a year. “By reducing the supply, this will bring up prices.”

“The government wants to stop the spread of pests and disease, cut production costs and improve productivity,” Theera said. “Benefits from price increases will follow.”

Removing one crop a year will interrupt the life cycle of pests like plant hoppers and reduce production costs from use of fertilizers and pesticides, Theera said.

The country produces about 20 million tons of milled rice a year, half of which is for domestic consumption. Exports from Thailand may advance as much as 5.2 percent to 9.5 million tons this year, according to the Ministry of Commerce.

“Talk of helping Thai farmers boost productivity, quality and profits is all well and good, but historically they only respond to price signals,” said Tom Slayton, an Alexandria, Virginia-based rice analyst and former publisher of The Rice Trader. “Unless the government can provide incentives, the policy will be ignored and there will be no change in production or export levels.”

Thailand plans to increase exports of premium-grade varieties and reduce shipments of low-quality grain, which represent more than half of exports, said Pramote, who is also a member of the National Rice Policy Committee. The group, headed by Prime Minister Abhisit Vejjajiva, helps set farmer prices and oversee the sale of government inventories.

Thai rice, the benchmark for Asia, declined 6.5 percent this year to $519 a ton on March 16 as overseas demand declined and the new crop from Vietnam pushed prices lower, according to the Thai Rice Exporters Association. The price surged to a record $1,038 a ton in May 2008.

Farmers are being encouraged to plant soybeans and green beans -- also known as mung beans -- which act as a natural fertilizer and can be sold in domestic markets as a substitute for exports, Theera said.

If the program fails, the government may consider other measures such as paying farmers not to plant rice, Pramote said.

“We don’t aim to be the world’s largest exporter,” he said March 21. “We’ve learnt from past experiences of being a key player in the market that farmers have been suffering losses because we can’t set appropriate prices by ourselves.”

Rice exports from Cambodia and Myanmar, which have lower production costs, could increase to offset any decline from Thailand, Pramote said. The two countries are Southeast Asia’s third- and fourth-largest shippers, according to the U.S. Department of Agriculture.

The government plans to increase rice productivity by 10 percent, boosting average yields to 500 kilograms per rai (0.16 hectare) in the crop year starting October 2015, Prasert Gosalvitra, head of Thailand’s state-run Rice Department, said on March 21. That will raise rough-rice output to 34.5 million tons from 31.4 million tons in the current crop year, he said.

To contact the editor responsible for this story: James Poole in Singapore atjpoole4@bloomberg.net