A world-first technology is turning tonnes of waste into bio-fuel and could transform the way the Kingdom approaches agriculture. 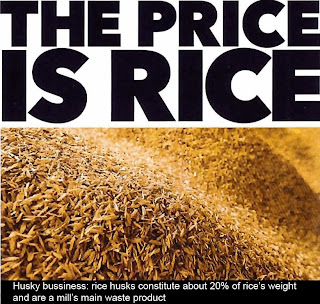 A top a massive furnace billowing with heat, one can peer through the flue into the inferno. It is a mesmerizing sight: waves of flame keep rice husk wheeling, condemned to an embodiment of the bible’s “eternal fire”.
Adisorn Chieu, the Cambodia managing director of local producer Angkor Rice, stands nearby. “TORBED” technology is the future of rice husk technology,” He says, confident that this huge reactor – the first of its kind installed anywhere in the world will revolutionize Cambodia’s rice industry.
Despite the status of rice as Cambodia’s undoubted food staple, the Kingdom’s rice industry lags behind that of its neighbors in term of both production and processing. Viet Nam can grow up to ten tonnes of rice per hectare, While Cambodia produces just three.
According to figure from the Ministry of commerce, rice exports doubled in the first seven months of this year. To keep up, the processing sector requires revolution. The rice industry misses out on premium export price because mills cannot cope with the increasing supply, meaning unprocessed rice is sold for nominal prices to Vietnam, where processing costs are minimal.
Rice mills, along with most Cambodians, are crippled by the cost and supply of electricity, with prices more than twice that of neighboring Vietnam. Most rice millers have their own diesel generators to ensure consistent power, but these are dirty, barely cheaper and do nothing to mitigate waste. Hence a revolution is indeed taking place, with mills turning to their own waste to power operations.
Rice husks constitute about 20% of rice’s weight and are a mill’s main waste product.  Currently, they are often burned in the open or dumped in rivers, where they release methane as they decay. However, they make perfect biofuel for gasifies – converters that can power small- and medium-sized plants by turning waste products into energy. The requisite gasifier systems’ initial costs depend on the size and make of machinery, but emancipation from the expensive grid reduces dependency on diesel to about 30% of most producer power needs.  In theory, gasifier systems allow a rice mill to cut its electricity costs in half.
A lake of capital provides the main barrier to jumping on this renewable energy bandwagon. Hence organization such as SNV, a development body from the Netherlands, step in to find financing option for the mills. Together with SME renewable energy, the Cambodia business selling gasifiers, they promote the technology to rice millers throughout Cambodia.
According to Ira Larasaty, SNV’s waste- to-energy program leader, “copycat gasifiers” pose a different type of problem: Their lake of quality renders them prone to breakdown, which sabotages the system’s reputation for efficiency and cost-reduction. Furthermore, bio-char is a waste product produced by gasifiers that can contaminate water and soil without proper treatment, while burnt rice husks contain levels of crystalline silica, which is carcinogenic. 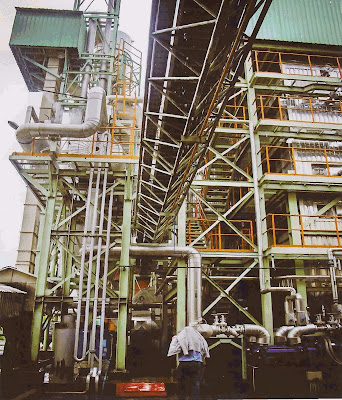 Future machine: Angkor Rice has embraced the expensive and
large-scaled TORBED technology (above); a schematic diagram
of the gasifier process (below)

“Accumulated solid waste is an issue that needs attention…. Most millers do not apply any treatment to gasifier wastes due to a lake of funding and lake of support,” said Larasaty.  “One of the objectives is to introduce a technology that is environmentally responsible and sustainable. This can be achieved by joining force with technology provider who are confident and can demonstrate that their systems are efficient and cost effective.”
For Large mills with capital aplenty, the TORBED reactor solves both electricity and waste problem. At Angkor rice headquarters near Phnom Penh, this multimillion-dollar, two megawatt power plant stands adjacent to it processing mill. Tonnes of stockpiled rice husk is conveyed into the furnace and burnt evenly at about 760c.
The operation is dauntingly high-tech, although it retains some Cambodian character: Above the buttons and knobs, dials and monitors, there hangs a golden Buddhist shine. According to Adisorn Chieu, this reactor halves the mill’s costs and they are plant to build another.
Unlike gasifiers and alternative large scale power generators in Cambodia, the TORBED reactor burns husks very evenly, resulting in amorphous silica, which , crucially, is non-carcinogenic and can be sold as a product in itself for use in the construction industry. The reactor also eliminates the need for diesel, making it a particularly eco-friendly power generator.
However, the convoluted technology means the team at Angkor Rice are dependent on knowhow and resource from abroad. “[TORBED technology] is the promising and potential for larger plants is huge as long as the support systems – trained operators, maintenance, funding etc – are implemented,” said Larasaty.
Biofuel from rice husks could play an important role in two of Cambodia’s projected goals. By increasing mills’s efficiency, the government’s aim to export one million tonnes of rice in 2015 could be realized, and with excess power from gasifiers and the TORBED reactor being sold to villager, biofuel could help the government’s scheme to electrify 70% of households by 2030.
“With gasifiers there is some failure, some success,” said Chieu. “TORBED is perfect for us, because here in Cambodia we have high electricity costs and plenty of rice husks.”