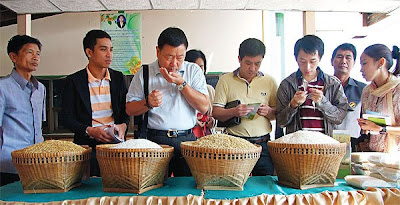 Chinese rice traders sample Thai Hom Mali rice at an event held in Si Sa Ket in response to reports that some shipments to China contained other varieties mixed with jasmine rice.
Hong Kong imports 220,000 to 230,000 tonnes, or 10% of the jasmine Hom Mali rice Thailand ships each year.

But the volume of Thai rice to the territory has been falling in recent years, as Cambodia offers lower prices by shipping out of ports in Vietnam, Thai exporters said.

"Cambodian fragrant rice sold in Hong Kong is very competitive at US$800 per tonne, lower than the $1,100 for Thai rice," said Charoen Laothamatas, the president of Uthai Produce, the country's leading Hom Mali exporter.

"Cambodia's jasmine rice appears to have the similar fine quality of Thai rice since it also has many locally owned strains and cross-bred varieties, some developed from Thai Hom Dok Mali 105 and Pathum Thani 1," he said.

Its exports have been active in recent years thanks to good productivity and the strong sweet scent of its jasmine rice grown from fertile soil with fewer chemical fertilisers, said Mr Charoen.

Prime Minister Hun Sen forecast earlier that Cambodia would produce 7.5 million tonnes of rice this year, more than enough for local consumption of 4 million, so it plans to export the balance.

Because Hom Mali sells at a premium, it encourages traders to copy the trademarks on bags of lower-standard grain, said Mr Charoen.

To alleviate the problem, he suggests the government classify other Thai jasmine fragrant rice strains in order to offer choices for consumers who don't want to spend as much.

He added the quality of Hom Mali rice, especially the aroma, has been deteriorating due to a lack of investment in research and development of rice breeds and the lack of a zoning system to ensure the grain's properties.

"It is always frightening to learn there are new strains of less fragrant jasmine rice being planted in the Northeast, the region most suitable for growing Hom Mali," he said.

Mr Charoen also urged the government to guard against illegal imports of Cambodian jasmine rice by Thai millers because of the Thai government's income guarantee programme.
Posted by AC at Monday, December 20, 2010